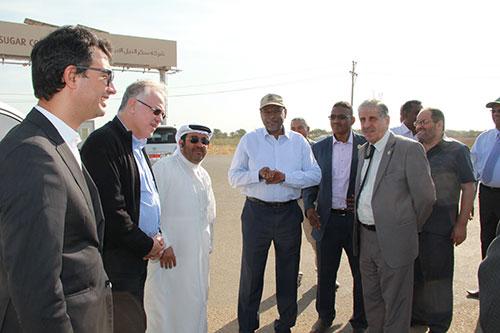 
The food-processing sector is one of AAAID’s main areas of activity and represents approximately 53% of its total investments. The sector includes sugar and oil processing along with other food industries.

To explore further partnerships and investment opportunities in the sugar sector, a delegation from the Tunisian Nabil Al Tareeki Group accompanied by His Excellency Mohamed Bin Obaid Al Mazrooei, AAAID President and a number of AAAID experts visited the site of the White Nile Sugar Company to overview the project’s components and immense capabilities. The company’s capital is 471 million dollars and the shareholders include AAAID, Kenana Sugar Company and other companies, institutions and banks.
To commence the visit, the delegation overviewed the irrigation pumps and the project’s irrigation processes and visited the company’s Research and Development farm. The delegation also received a detailed elaboration from the farm administrators, explored the process of preparing the land for cultivation and visited the factory to overview the production operations.
In conclusion, a meeting was held with the company’s management during which they provided a detailed explanation of the establishment and operation of an integrated agricultural complex project for the production of white sugar and some secondary products. The project will also generate energy with a design capacity of approximately 450,000 tons of white sugar, approximately 115 megawatt of electricity, 45 million liter of biofuel, feed and a number of agricultural crops.
On another front, a delegation led by His Excellency Mohamed Bin Obaid Al Mazrooei, AAAID President visited His Excellency Dr.Mudatther, the Minister of Investment of the Republic of Sudan on Monday 12/12/2016 in his Ministerial Office.
His Excellency the President welcomed AAAID President, wished him a pleasant stay in the Republic, and presented the country’s investment opportunities and areas. He pointed the incentive privileges granted to investments including custom exemptions, procedural facilities and guarantees granted by the investment act. His Excellency also stated that investment is considered an important national economic pillar that through which the state utilizes its resources in addition to the development and support of Sudan’s relations in the Arab sphere. He added that the state is working towards supporting Arab efforts in the field of food security and the allocation of resources to serve economic causes. He welcomed investors, businessmen and Tunisian companies to invest in Sudan in the agricultural and industrial services sectors stating that the Ministry prepares technical studies for investment projects and has availed accurate detail for each project.