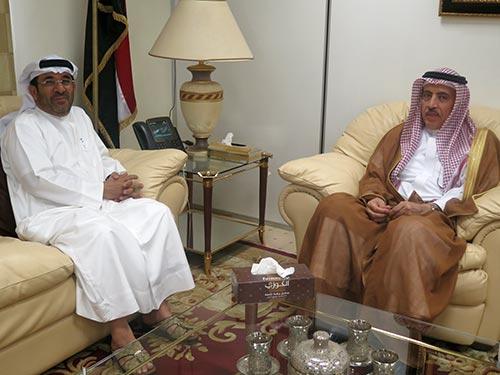 
AAAID continuously aims to strengthen relations with private, public sector and international organizations related to the reinforcement of food security to enhance agricultural investments in the Republic of Sudan and all the Arab countries.

In this context, AAAID President His Excellency Mohamed Bin Obaid Al Mazrooei welcomed His Excellency Faisal Hamid Maala, the Ambassador of the Kingdom of Saudi Arabia in the Authority’s Headquarters in Khartoum on Tuesday 25/10/2016.

H.E. Al Mazrooei welcomed H.E. the Ambassador and expressed his gratitude for the valued visit, which came in occasion of the end of his term in the Republic of Sudan. The visit also aimed to enhance relations and the existing notable cooperation between the Authority and the Embassy of the Kingdom of Saudi Arabia, which is one of the largest contributors to AAAID’s capital highlighting its projects in the Kingdom.

His Excellency, The Ambassador thanked AAAID President for his warm welcome and expressed his appreciation for the Authority’s role and status in the reinforcement of food security. His Excellency stated that AAAID’s responsibility was increasing by the day with the increase of the Arab food gap, which necessitates the consolidation of the efforts of all stakeholders to increase Arab agricultural investments. He also pointed that Sudan is rich in the required natural resources to achieve Arab food security and is eligible to become a global agricultural sector pioneer.