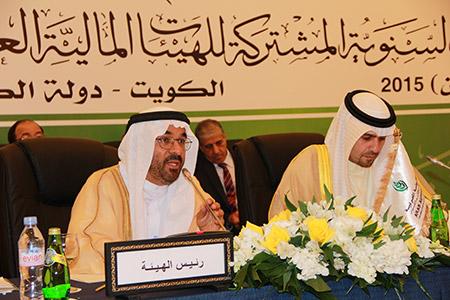 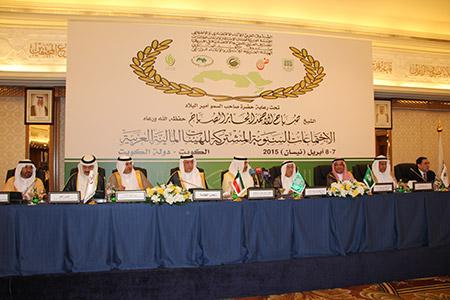 
The joint annual meetings of the Arab Financial Institutions began today on Tuesday 7 April 2015 in Sheraton Hotel in Kuwait, under patronage of HE Sheikh Sabah Al Ahmad Al Jaber Al Sabah –Prince of the State of Kuwait.
The sessions opened by his highness Sheikh Sabah Khalid Al Hamad Al Sabah –Deputy Prime Minister and the Minister of Foreign Affairs of Kuwait State in participation of His Highness Dr. Ibrahim Bin Abdulaziz Al Assaf –Minister of Finance of the Kingdom of Saudi Arabia who chaired the joint sessions, in the presence of their excellences the heads of the Boards of Directors of the Arab Financial Institutions which include the Arab Fund for Social and Economic Development, the Arab Investment and Export Credit Guarantee Corporation , The Arab Bank for Economic Development in Africa , the Arab Monetary Fund and the Arab Authority for Agricultural Investment & Development.
Most notably that the Board of Directors of AAAID has issued some resolutions:

The Board extended its deep thanks and grateful to His Highness Sabah Al Ahmad Al Jaber Al Sabah – Prince of Kuwait State and the Government of Kuwait for the hospitality and warm reception during the sessions of the 39th meeting in Kuwait.
The Board has extended its grateful and thanks to HE Dr. Ibrahim Ibn Abdulaziz – Minister of Finance of the KSA for his efforts during his presidency of the Board in its 38th session, the Board as well extended its grateful to the President and members of AAAID’s Board of Directors for the fruitful efforts during the last year.