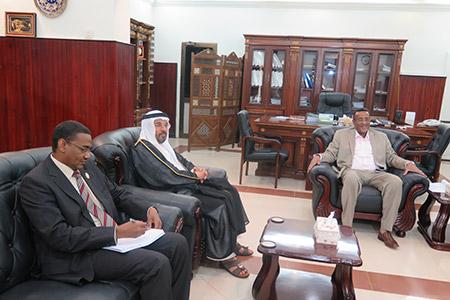 Al Mazrowei meets the Sudanese Minister of Agriculture and Irrigation


His Excellency Mohamed Bin Obaid Al Mazrowei – President of AAAID has met His Excellency Eng. Ibrahim Hamid Mahmoud – Sudanese Minister of Agriculture and Irrigation on Wednesday 6 May 2015. In his office in in the Ministry of Agriculture in Khartoum, in the presence of Eng. Baha El Din Khamis – undersecretary of the Ministry of Agriculture and Mr. Amin Abdullatif – head of the Board of Directors of the Central Trading Company.
In the beginning of the meeting, the Minister has welcomed his Excellency Al Mazrowei and the accompanied delegation and he extended his thanks to him for the continuous communications with the officials in the Ministry and the government of Sudan, stressing the huge natural resources in Sudan, mentioning the initiative of his Excellency the President of Sudan on food security.

For his part, his Excellency Al Mazrowei extended his thanks to the Minister for the opportunity of the meeting and praised the support from the government of Sudan to AAAID activities and investments in Sudan , pointing to challenges in the coming phase that require more efforts in order to develop investments in this country.
He also reviewed AAAID’s efforts to follow up the existed projects in Sudan
At the end of the meeting, His Excellency the Minister affirmed his government full support to AAAID and its affiliated companies in Sudan and he promised to overcome all the difficulties that may hinder its activities.