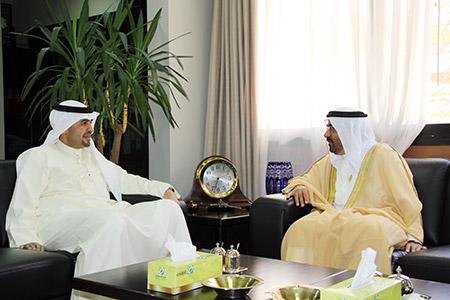 Al Mazrowei Meets with the Kuwaiti Minister of Finance


During his visit to Kuwait states during the period 21-25 March 2014 , HE Mohamed Bin Obaid Al Mazrowei,President of AAAID met with his Excellency Anas Khalid Al Salih –the Kuwaiti Minister of Finance , the member of AAAID’s Board of Shareholders ,in the presence of Mr. Bader Mohamed Al Al Saad – Managing Director of Investment Department and HE Barak Mubarak Al Mubaraki – Representative of Kuwait State in AAAID’s Board of Directors.

HE the minister welcomed the visit of HE president of AAAID and extended his thanks to AAAID’s top management for its communication with governments in the member states.
HE Al Mazrowei extended his thanks to the Minister for the warm reception and for the support from Kuwait state to his nomination as president for AAAID.
HE President Al Mazrowei gave an overview on AAAID financial and investment position as well as its future plans.
The meeting discussed AAAID activities in the member states beside the investment opportunities in Kuwait State especially in dairy production, poultry and fisheries.
AAAID’s delegation participated at the regular opening session of the Arab Summit that held in Kuwait on 25 / March 2014 and they also witnessed the preparatory meetings for the Economic and Social Council of the League of Arab States on 20 / March / 2014.