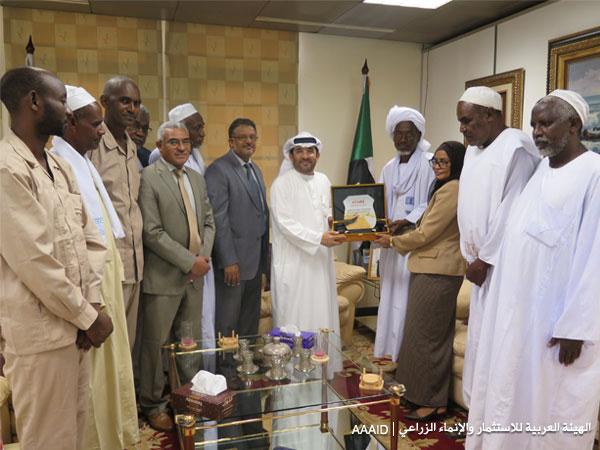 
A delegation, headed by Dr. Al-Jaili Al-Bilal of the Gabouja branch of Al Rhadi Office in the Al-Jazeera Agricultural Project visited the headquarters of the Arab Authority in Khartoum on 18/7/2017 to give their thanks and appreciation to the Arab Authority on the provision of the funding made accessible to the different associations. These include Um Al Ujoor Association, Msallam Association, Wad Khalid Association, Abu Hamra Association, and Al Aghar Association.
The delegation met with HE Mr. Mohammed Bin Obeid Al Mazrooei, President of the Arab Authority, and expressed their gratefulness for his standing with them in all stages of the work since the funding and up to the harvest phase. The delegation assured AAAID that they would continue with the same enthusiasm and keenness so that the experience will prevail throughout the region. For his part, HE the President of AAAID expressed his readiness to continue the efforts of the Arab Authority to stand with them, support them, and even participate in the field.

It is worth mentioning that the project management has paid the entire loan granted to it by the Arab Authority, under which 1000 feddans were cultivated during the summer season and 500 feddans of wheat in the winter season of 2016-2017.
These associations operate through the revolving loan fund established in 2008 to support small farmers in Arab countries. The Arab Authority is providing its development programs through the Small Farmers and Producers Support Program initiated by the Arab Authority with the aim of optimizing the use of natural resources through the provision of appropriate, continuous and reliable credit services to small farmers. This in addition to encouraging rural finance institutions and civil society organizations in the member countries of AAAID to improve the living and food standards of the rural population.