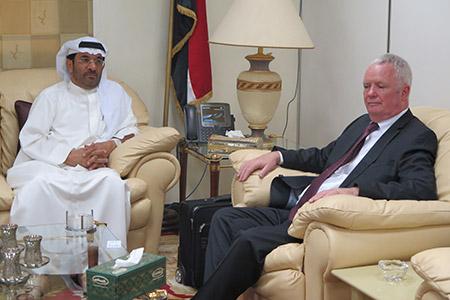 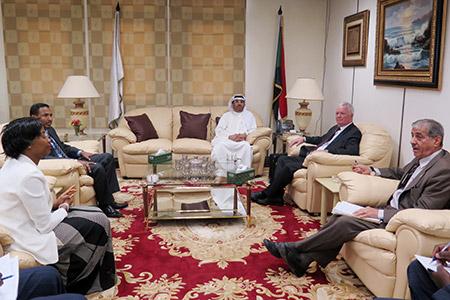 Enhancing Cooperation between AAAID and the German Private Sector


His Excellency Mohamed bin Obaid Al-Mazrooei, President of AAAID received a delegation consisting of a German Consulting Company in his office at Headquarters on December 3, 2015.
The President welcomed the members of the delegation and expressed his gratitude and appreciation for their visit. He stated his openness towards cooperation with German companies in the sectors that align with the nature of AAAID’s activities, which he relayed during the meeting.
On his side, Mr.Alaa Aldin Samir, General Manager of Samir Buller provided an explanation of the company’s work and expressed its interest in cooperating with AAAID in the transfer and dissemination of German technologies. He further explained the models that can be utilized in development projects, which include mobile oil compressors, agricultural harvest peelers and technologies that can be benefited from to produce fertilizers and fodder from agricultural waste. He added that the company was prepared to produce customized machinery according to the required specifications. The delegation also presented a proposal for a water turbine that operates on solar power affirming their preparation to participate in training and building the capacity of the target beneficiaries.
The meeting concluded with a recommendation to develop a Memorandum of Understanding between the two parties to enhance and activate mutual cooperation between them.