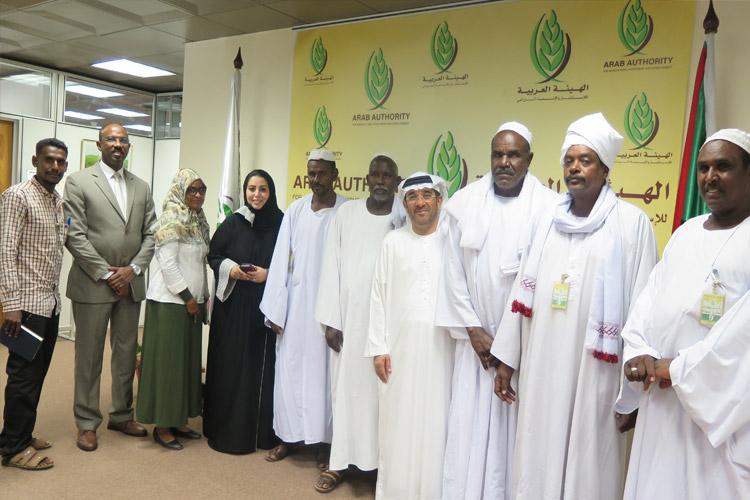 
In a wonderful humanitarian gesture, appreciation and recognition of the efforts of the Arab Authority’s management and its role and support for small farmers and joy in the pioneering role played by the Arab Authority for Investment and Agricultural Development in the western of the Al-Jazeera province in the regions of Al-Shawal, Gabojja and Matouri. In this context, a delegation of farmers from the region visited HE Mohamed bin Obaid Al Mazrooei, President of the Arab Authority, at his office at the headquarters in Khartoum, on 25 September 2018, congratulating him on his re-election for a second term.

The farmers confirmed that the experience of the Arab Authority funding them in the cultivation of peanut, wheat and maize crops was successful and enabled them to change their economic conditions, stressing that this funding has created a social and economic boom; and development in the region and improved the life of citizens. Emphasizing the readiness to continue with the Arab Authority to increase the number of beneficiaries of funding in the coming seasons. They further stated that the results achieved thanks to the efforts of the management of the Arab Authority towards them and the unlimited support from the Arab Authority, which comes in the form of the extension of agriculture and the resettlement of agricultural technologies and the provision of loans and supervision of different stages of production.