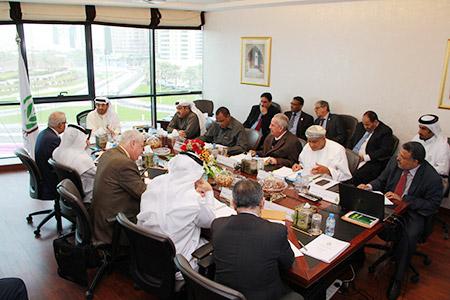 First Meeting of The Board of Directors for the year 2016


The Board of Directors of the Arab Authority for Agricultural Investment and Development convened its first meeting for the year 2016 on 24 February 2016 in Dubai, United Arab Emirates. His Excellency Mohamed Bin Obaid Al Mazrooei, Chairman of the Board and the presence of the esteemed Board Members headed the meeting and its agenda included a number of important subjects relevant to AAAID’s investments. The Board approved a number of decisions of which was the approval of the Investment Operations program for 2016 amounting to 22.8 million Kuwaiti Dinar. The BOD also approved AAAID’s contribution of 5.3 million US Dollars in the integrated project for the production, sorting, grading and packing of juice concentrate in the Moroccan state of Meknas. Further, the BOD authorized the execution of the first phase of the Red Meat Project by establishing the company for the collection, fattening and export of livestock in the Republic of the Sudan. Finally, it approved AAAID’s subscription in the increase of capital of the Arab Fisheries Company.