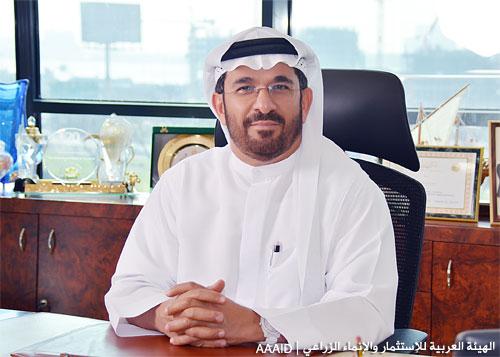 French interest in the Arab Authority’s projects and activities


H.E Mr. Mohammed Bin Obaid Al Mazrooei, President of AAAID, participated in the Sudanese-French Economic Forum held on 4 July in Paris, France. The event was jointly organized by the General Federation of Sudanese Employers, the French Embassy in the Republic of Sudan, ADEPTA, which provides technical, financial and technological services to companies working in the agricultural sector and AXEMA, which is a consortium for manufacturers and importers in France. The meeting was attended by a number of businesspersons and companies working in the agricultural field in Sudan and France.

During the forum, H.E Mr. Mohammed Obaid Al Mazrooei, President of AAAID, presented a paper in which he explained that, since its establishment, the Arab Authority has been interested in agricultural development and has achieved many accomplishments in the agricultural sector. He further explained that the Arab Authority’s work is divided into 4 major sectors as follows: agricultural manufacturing, plant production, livestock production and agricultural services. H.E Mr. Mohammed Al Mazrooei also stated that AAAID contributed to the implementation of several development programs targeting mainly small farmers and producers as they contribute the largest share of agricultural production in African and Arab countries.
These programs included the deployment and settlement of modern agricultural technologies and the provision of agricultural services such as revolving loans to provide the requirements of agricultural operations. He further explained to the forum participants that the Arab Authority has experience in the field of agricultural investment in Sudan gained over the span of four decades. Additionally, there is stability, advantages and potential available in Sudan that France needs, and the activation of cooperation between the two countries can lead to the development of the Sudanese economy. His Excellency also called on French companies to collaborate with the Arab Authority in establishing pioneering agricultural projects in Sudan. He also invited French and Sudanese companies to attend a promotional forum organized by AAAID in collaboration with the Mauritanian Ministry of Veterinary, to be held in Mauritania during the second half of 2017.

During the forum, H.E Mr. Mohammed Al Mazrooei, President of AAAID met with the director General of the World Organization for Animal Health (OIE). He explained that the objectives of the Organization are to ensure transparency in the general situation of animal diseases and to protect international trade through the dissemination of health standards for the international trade of animal products. This is in addition to evaluating the performance of veterinary services in various member countries through the use of the international quality standards and evaluation mechanism and collaboration with the OIE regarding the red meat project in Mauritania. Adding that there are areas of cooperation within the framework of the regional program for protection against trans-boundary animal diseases, which is being implemented in cooperation with the World Bank in West African countries (including Mauritania). AAAID’s President also met with PROPARCO, a development financial institution partly owned by French Development Agency and B2Marine. During these meetings, H.E Mr. Mohammed Al Mazrooei discussed fields of collaboration and coordination between the Authority and those institutions.
The forum program included working sessions on the large agricultural potential and agricultural investment opportunities in Sudan, in addition to organizing B2B meetings for a number of companies and economic institutions participating in the forum.