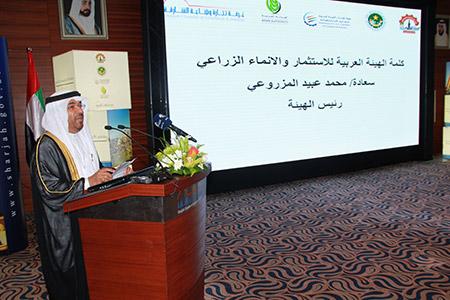 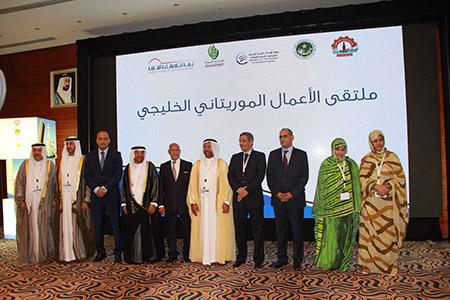 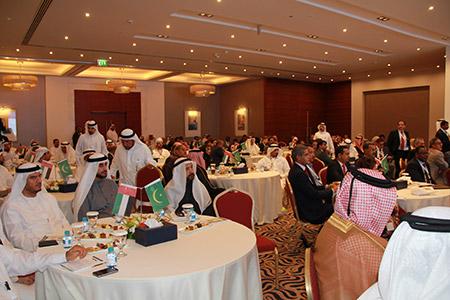 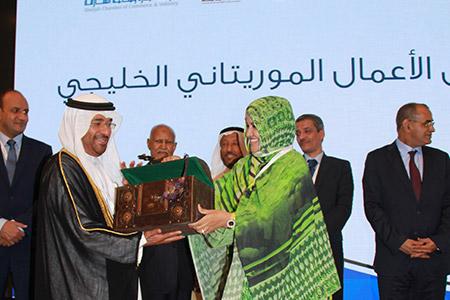 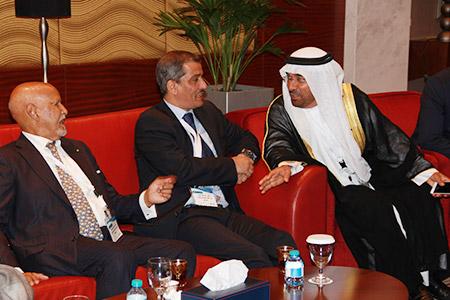 
The GCC-Mauritanian Business Forum was held on Monday, February 25th 2016 in the Emirate of Sharjah in the UAE. The Forum was organized by the Sharjah Chamber of Commerce and Industry in partnership with AAAID and the Ministry of Economic Affairs and Development of Mauritania.
The Forum aimed to define the investment climate and available resources in the Islamic Republic of Mauritania and explore areas of cooperation with GCC countries especially in the agricultural, animal and fishery resource sectors. This comes in light with the large resources owned by the Islamic Republic of Mauritania represented in vast agricultural lands, an abundance of fresh water and animal and fishery resources.
Mauritania constantly seeks to expand and develop its resources by attracting investments that depend on advanced technologies and expertise and an integrated approach towards providing added value in these sectors. This includes establishing feasible investment projects that will yield returns to the Mauritanian economy on one hand and willing investors on the other.

The forum commenced with speeches by His Excellency Abdullah Al Owais, President of the Sharjah Chamber of Commerce and Industry,His Excellency Mohamed Bin Obaid Al Mazrooei, President of AAAID, His Excellency Sid Ahmed Al-Rayis, Minister Economic Affairs and Development, His Excellency Al Nani Wild Ashrooqa, Minister of Fisheries and Maritime Economy, Her Excellency Lamina bint Qutb Wild Moma, Minister of Agriculture and Her Excellency Fatm al Fal Bint Asweenia, Minister of Veterinary. The Forum was also attended by a high-level group of Mauritanian delegates in addition to the Undersecretary of the Ministry of Economy and the Vice President of the Federal Chamber of Commerce and Industry of the UAE. The Forum was also attended by a number of members of the Board of Directors of the Sharjah Chamber for Industry and Commerce and heads of regional organizations and authorities and representatives of diplomaticcorps as well as a number of businessmen and those interested in the economy.
His Excellency Mohamed Bin Obaid Al-Mazrooei, President of AAAID presented a welcome note in the opening session in which he addressed the importance of strengthening collaborations between businessmen and the specialized authorities in the Republic of Mauritania in the different sectors of agricultural investment. He explained that in spite of the efforts exerted by Arab countries to reinforce Arab food security, the growth rate of agricultural investments remain inadequate to realize the ambitions of increasing demand on food in light of the population growth increase and the growth of the Arab food gap. His Excellency stated that the Islamic Republic of Mauritania is considered one of the richest Arab countries in terms of natural resources such as vast agricultural lands and abundance of fresh water and various animal resources.

It is worth mentioning that AAAID started its activity in Mauritania since 1995 with the establishment of agricultural research stations in the city of Rosso. The goal of these stations is to conduct applied research and provide agricultural extension services to farmers and establishing the base for agricultural projects. AAAID has succeeded in developing the productivity of a number of field harvests and localizing the use of modern technologies and integrated agricultural packages for farmers. It also prepared feasibility studies for a number of investment projects in different production sectors, which included dairy, meat, cultivation of field crops and sugar production.
In conclusion, of the opening session, memorial gifts were exchanged between their Excellencies, the heads of participating delegations after which they proceeded with demonstrative documentaries and presentations presented by members of the Mauritanian delegation. Finally, group networking sessions between the members of the Mauritanian delegation consisting of their Excellencies the Ministers, businessmen and investors in which they discussed investment opportunities and benefits in Mauritania in addition to potential areas of investment cooperation.
The Forum was concluded with the signing of two investment agreements, one of which was between AAAID and number Mauritanian investors to establish a Surface Fishery Production and Marketing project in Mauritania.