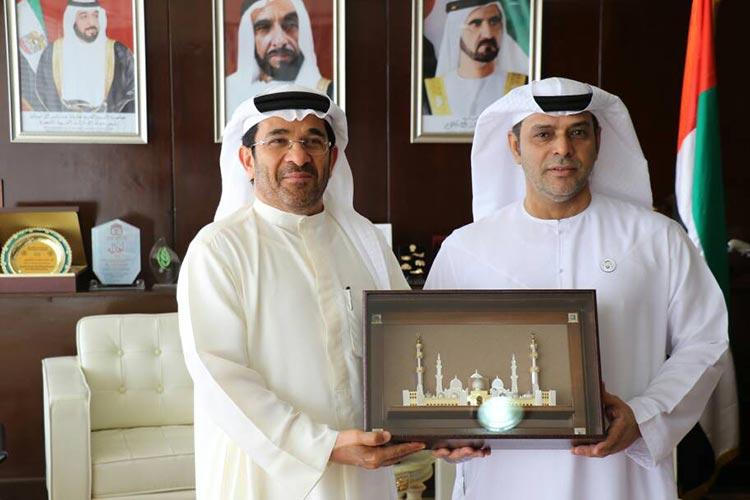 
His Excellency Hamad Mohammed Humaid Al-Junaibi, Ambassador of the United Arab Emirates, met on 19/7/2018 at his office in Khartoum, His Excellency Mohammed Bin Obaid Al Mazrooei, President of the Arab Authority for Agricultural Investment and Development.

The Ambassador congratulated the President of AAAID on the valued trust he was granted by the Board of Shareholders of the Arab Authority for Investment and Agricultural Development to re-elect him for a second term of office 2018-2023. He also praised the role played by the Arab Authority to develop agricultural investments throughout the Arab world, stressing the importance of the agricultural sector in achieving comprehensive development, as it is the main engine of other economic activities, and thus improve economic growth rates and increase employment opportunities. He further stated that the achievement of social peace in any country is closely related to achieving food security. Therefore, the UAE attaches particular importance to the development of agricultural investments in the Arab region and encourages national and private institutions to contribute to this vital sector. Adding that the UAE contributes to investments in this sector in most Arab countries that have comparative advantages in agricultural resources, especially the Republic of Sudan.

H.E Mohammed Al Mazrooei, in turn, briefed H.E the Ambassador of the UAE on the efforts of the Arab Authority in enhancing Arab food security through its agricultural projects in the Arab world, which amount to 44 projects distributed in different Arab countries. This is according to the relative advantages in each country in terms of the availability of agricultural land and favorable climatic conditions. His Excellency also explained the plans and programs to increase agricultural investments and improve productivity by applying the latest modern agricultural technologies. As well as efficient use of irrigation methods to rationalize the use of water resources and regional cooperation to stimulate intra-Arab trade and exchange of agricultural products. His Excellency also invited the Ambassador of UAE to the Strategic Partners’ Ceremony organized by the Arab Authority in celebration of the achievements gained with AAAID’s partners. In addition to appreciation of their efforts and cooperation in order to overcome the obstacles facing the investments of the Arab Authority and push Arab agricultural development to new boundaries.

His Excellency Hamad Mohammed Humaid Al-Junaibi, UAE Ambassador in Khartoum praised the Arab Authority’s projects in UAE, which became a leading example in the Arab region such as Emirates Rawabi, which is comprised of; Al Rawabi Dairy Company, Emirates Modern Poultry Company and Green Fields for Feed Industries. His Excellency the Ambassador further expressed his pleasure for the future plans of the Arab Authority to develop the Arab Poultry and Cattle Equipment Company (APCECO) in Fujairah, as well as other new proposed projects.

To conclude the meeting, H.E the Ambassador thanked H.E the President of AAAID for the visit, which aims to strengthen cooperation with all official bodies in Arab countries to achieve more coordination, support activities and programs that enhance Arab food security.