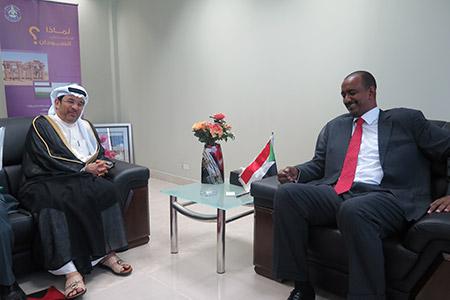 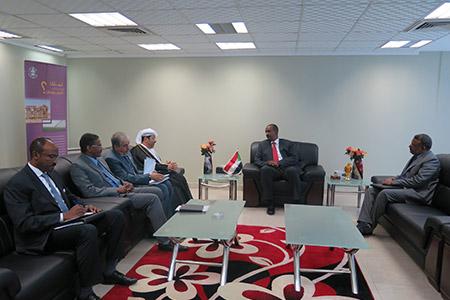 His Excellency Al Mazrooi’s meeting with the Minister of Investment


His Excellency Mohamed Bin Obaid Al Mazrooi –AAAID‘s President accompanied with the heads of departments has visited His Highness Mudathir Abdulghani – the Minister of Investment in the Republic of the Sudan on Thursday Oct 9th 2015.
Mr. Al Mazrooi extended his gratitude to the Minister for the meeting, where he congratulated him by awarding the confidence of the President of the republic of Sudan and also by appointing as a minister of Investment and wished him success.
The meeting discussed the new projects of AAAID in Sudan , Mr. Al Mazrooi has briefed the Minister on the Red Meat Project in Sudan at a cost estimated at USD 120 million and the project will be implemented in two phases:
The first phase will take advantage of the cow cages, which belonged to the Arab Company for Agricultural Production and Processing in Bager area.
In the second phase consists of witnessing the establishment of slaughtering and meat processing plant in addition to a central laboratory and fodder production project.
For his part, HE the Minister extended his thanks to Mr. Al Mazrooi on the visit, praised the project, and assured that it would be a qualitative addition to meat processing in Sudan.
The meeting reviewed the challenges that facing AAAID investment in Sudan, the Minister promised to coordinate with the other governmental authorities to overcome all challenges.