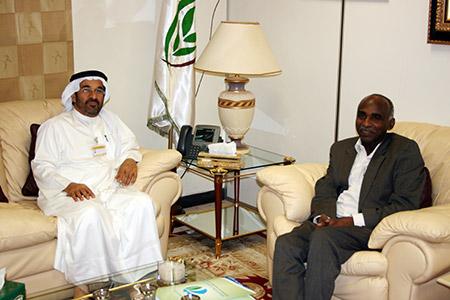 
His Excellency Mohamed Bin Obaid Al Mazrowei , President of AAAID has received in his office in Khartoum HE Eng. Abdullah Ahmed Hamad – Minister of Investment and Production in Khartoum State on Thursday March 6th , 2014.
HE Al Mazrowei welcomed the Minister and he gave him an explanation on AAAID’s activities and programs in the different aspects of agricultural investments.

The two parts have also discussed the ways to support cooperation between AAAID and Investment Department for more efficient role for AAAID in Sudan.
HE Al M azrowei stressed the responsibility of AAAID to bridge the gap of food in the Arab world and the need to redoubling the efforts by all parts , in order to increase the agricultural production in the Arab World , pointing to the abundant resources of Sudan (head quarter of AAAID).
From his part HE the Minister has extended his thanks to HE the President and affirmed the strong relationship between Sudan and AAAID.