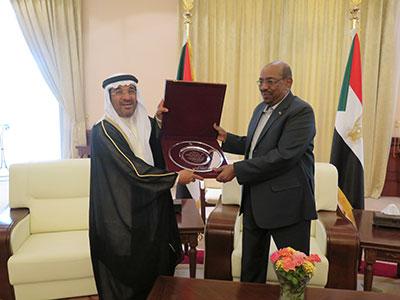 
His Excellency Mohamed Bin Obaid Al Mazrooei and his accompanying delegation visited His Excellency Field Marshall, Omar Hassan Ahmed AlBashir in hid Presidential Palace on June 13th 2016. The visit came in the context of AAAID’s senior management to resolve the issues and obstacles facing its affiliated companies in the host country, which constitutes 61% of AAAID’s total investments.
The visit deliberated AAAID’s investments in Sudan whereby H.E Mohamed Al Mazrooei expressed his gratitude and appreciation to His Excellency the President of Sudan for granting the opportunity to AAAID to host its Headquarters in the country. He also thanked him for His Excellency’s Arab Food Security Initiative and presented AAAID’s investments in Sudan explaining that they were represented by 11 companies which more mostly partnerships with the Government of Sudan. He explained that AAAID’s investments in these companies exceeded 700 million USD and they worked in the fields of sugar production, grains, oils, milk, and poultry and feed production. His Excellency also addressed the obstacles and challenges facing AAAID’s companies in Sudan among which the most important was and the decommissioning and non-renewal of land. He stressed the importance of the establishment of a supplementary irrigation canal in Agadi in the Blue Nile State. He also extended an invitation to His Excellency for inaugurating the Veterinary Medicine Production Project in Sudan, which was established at a cost of 37 million USD and which was expected to kick-off at the end of the current year.
The meeting also overviewed AAAID’s future projects in Sudan whereby AAAID began the implementation of the Red Meat Production and Processing Project at a cost of 120 million US dollars.
In conclusion, His Excellency President of the Republic of the Sudan expressed his gratitude to AAAID’S President for his visit and ensured his support of AAAID’s investments in the country. He added that he directed the relevant states to resolve the land issued facing AAAID’s projects. He emphasized AAAID’s vital role in achieving his Arab Food Security Initiative and in utilizing Sudan’s agricultural resources. His Excellency stated the government’s  determination and commitment to creating a stimulating investment climate in Sudan to attract Arab investors in the agricultural sector and to resolving all challenges they may face.