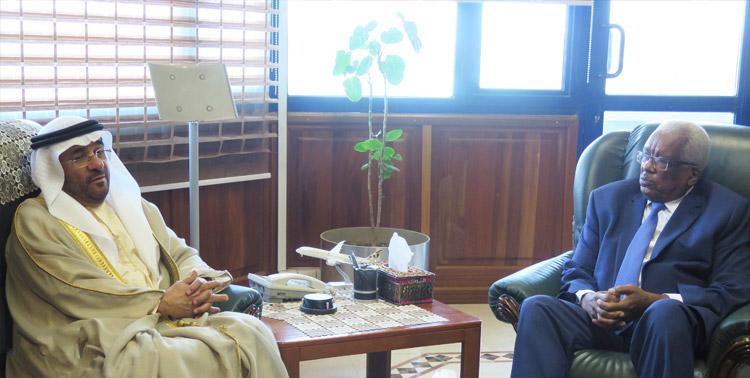 H.E the President of AAAID congratulated the H.E Governor on the occasion of assuming his new duties as Governor of the Bank. His Excellency also expressed his thanks and appreciation to the Governor for giving him the opportunity to meet, with the aim of introducing the Governor to the Arab Authority and its vision, mission, goals and investments in the plant production, animal production and the industrial sector. His Excellency the President also praised the support and attention received by the Arab Authority’s projects in the headquarters country from the Government of the Sudan, as well as looking forward to further support so that AAAID can achieve its mission to reinforce Arab food security.

For his part, the Governor welcomed H.E the President of the Arab Authority and his accompanying delegation and wished the Arab Authority success in its ambitious efforts to increase investments in Sudan. Further appreciating the role of the Arab Authority in the Republic of Sudan and its contribution to the Sudanese economy in the field of dairy, starch, poultry and glucose in the host country. The governor also promised to provide all the assistance and support to the Arab Authority and its Affiliate Companies in the headquarters country to serve its objectives to enhance food security.