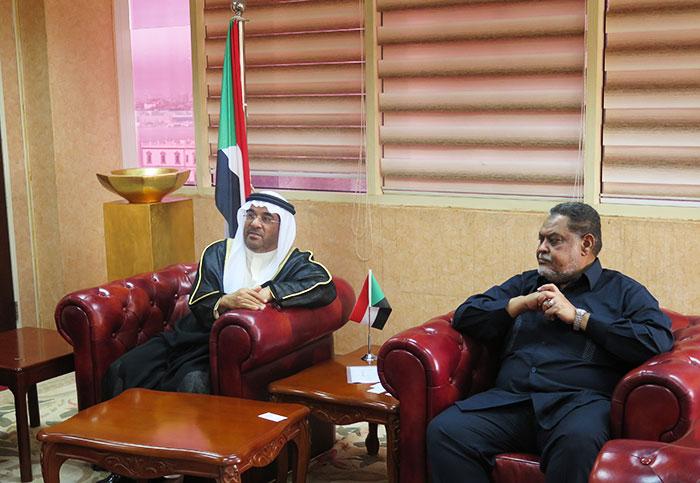 
H.E Mr. Mohamed bin Obaid Al Mazrooei, President of the Arab Authority for Agricultural Investment and Development, met with H.E Dr. Mohamed Othman Sulaiman Al-Rikabi, Minister of Finance and Economic Planning of the Republic of Sudan, on Tuesday 22 August 2017 at his office in the Ministry of Finance premises in Khartoum.

H.E Mr. Al Mazrooei expressed his thanks and appreciation to H.E the Minister for providing the opportunity to have the meeting, which comes within the framework of discussing the developments of investment prospects and studies concerning the restructuring of some of the companies operating in Sudan. This is with the aim of utilizing their full productive and operational capacity in coordination with the Ministry. The meeting also tackled the challenges faced by the companies of the Arab Authority where some practical recommendations were discussed on how to overcome these challenges. There was also a review of the role played by the Arab Authority in supporting small farmers to increase agricultural production through the Revolving Loan Fund program.

H.E the President stressed the need to coordinate efforts of the Arab Authority, the Ministry of Finance and Agadi Company to attract Arab funding to support the project of a supplementary irrigation channel in the Damazin region. This will accelerate the process of agricultural development in the region and enable the company to take advantage of both the summer and winter seasons. On his part, the Minister welcomed the President of AAAID and wished the Arab Authority success in its serious efforts to increase investments in Sudan, appreciating the role of the Arab Authority in the Republic of Sudan and its contribution to the Sudanese economy.