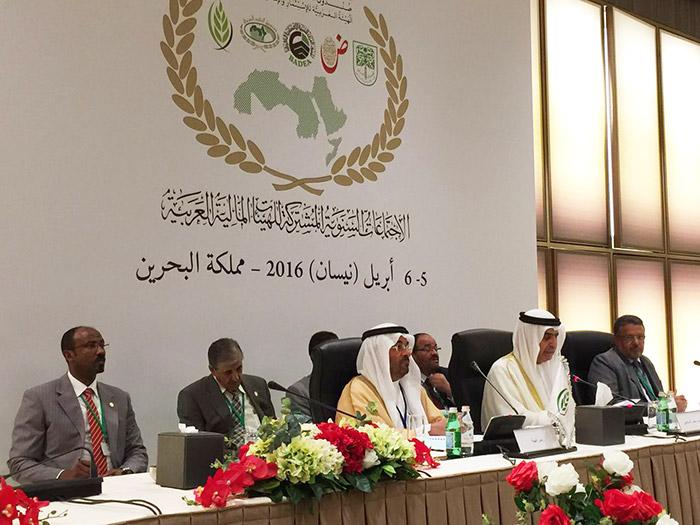 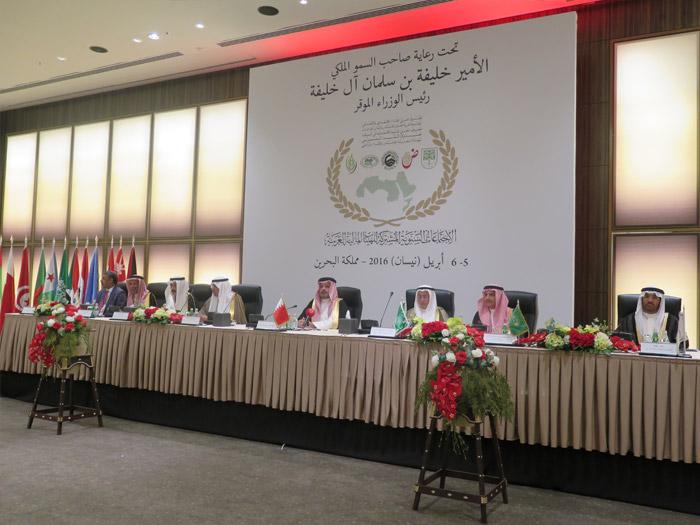 
His Highness Obaid Humaid Al Tayer, Minister of State for Financial Affairs of the United Arab Emirates chaired AAAID’s 40th Board of Shareholders Meeting in the Art Rotana Hotel in Manama, Kingdom of Bahrain during the period 5-6 April 2016.

The meeting was held as part of the annual joint meetings for the Arab Financial Institutions that were inaugurated by His Royal Highness Prince Khalifa Bin Salman Al Khalifa, the Prime Minister and included The Arab Fund for Economic and Social Development, The Arab Investment Guarantee and Export Credit Corporation, The Arab Bank for Economic Development in Africa (BADEA), The Arab Monetary Fund and the Arab Authority for Agricultural Investment and Development.

Sheikh Ahmed Bin Mohamed Al Khalifa, the Minister of Finance presented a speech during the opening session in which he emphasized the importance of the event and its role in presenting an opportunity for Arab countries to deliberate on the most recent regional and international economic trends and their impacts on Arab economies. He commended the pioneer role that Arab financial authorities are playing in providing institutional support to joint Arab development efforts.
An elite group of representatives of the financial attended the meetings and banking sectors in the Arab world at the head of which were Ministers of Finance, Central Bank Governors and Heads of Arab Financial Authorities.

In his opening speech, His Excellency Mohamed Bin Obaid Al-Mazrooei, Chairman and President of AAAID conveyed his deep respect and gratitude to His Highness King Hamad Bin Eissa Bin Salman Al Khalifa, the King of Bahrain for the Kingdom’s hosting of the meetings. He also thanked His Highness Prince Khalifa Bin Salman Al Khalifa, the Prime Minister for his generous auspices of the annual meetings and the Crown Prince His Highness, Deputy Supreme Commander and the First Deputy Prime Minister and to the government and people of Bahrain for their generous welcome and hospitality. His Excellency also congratulated His Highness Obaid Hameed Al Tayer, Chairman of the Board of Shareholders on the occasion of his election as Chairman of this year’s session and wished him success. His Excellency also congratulated His Excellency Anas Khalid Salih, the Deputy Prime Minister and Minister of Finance in the State of Kuwait for the great role he played during his Chairmanship of the previous Board of Shareholders meetings.

His Excellency also expressed his gratitude and sincere appreciation to the Republic of Sudan and the United Arab Emirates for the hosting of AAAID’s Headquarter and Regional Office and for the support and facilitations offered to AAAID. His Excellency summarized AAAID’s data for the year 2015 explaining that the total shareholder equity in AAAID reached 749 million US Dollars as at 31/12/2015 as compared to 649 million US Dollars in the previous year. In terms of production, the value of AAAID’s investments in agricultural companies as at 31/12/2015 amounted to 573.5 million dollars and the number of agricultural companies reached 34 of which 30 are established and 4 are still under implementation. In regards to investment programs, His Excellency stated that during 2015, AAAID’s Board of Directors approved the contribution in a number of new investment projects including expansion and rehabilitation projects. He added that the implementation of investment operations reached 99.6% of the approved amounts in 2015 and that AAAID has studies a number of projects at the outset of this year as part of 2016’s investment operations.

The Council issued a number of decisions that included approval of AAAID’s annual report for the year 2015, approval of AAAID’ budget as at 31/12/2015, approval of the final accounts and the Board of Director’s Report on this data. The Council also approved allocating 10% of 2015’s Net Profits as General Reserves. The Council also approved the allocations of 10% of the Net Profits to support the people of Palestine through the Aqsa and Quds Fund. The Council also approved AAAID’S 2016 Investment Portfolio at 22.8 million Kuwaiti Dinars and elected the Representative of the Republic of Sudan as Chair of the 41st Annual Council Meetings. The Representative of the Government of Iraq in the Council of Shareholders was elected Vice-Chair stating that they commence their authorities as of the next meeting that will be held in the Kingdom of Morocco in 2017.