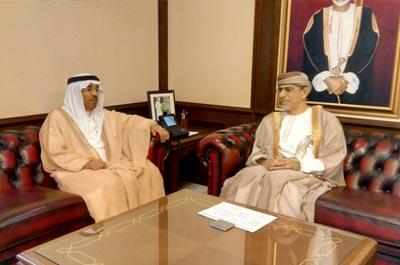 
The Sultanate of Oman is one of the member states that contribute to AAAID’s capital with a percentage of 0.07%, the equivalent of 23 shares. Oman enjoys an attractive investment climate and a true promising vision for achieving food security through the implementation of a number of projects that aim to achieve its self-sufficiency.
This vision comes as a greater incentive for AAAID to establish agricultural investments in the Sultanate. In this light His Excellency Mohamed Bin Obaid Al-Mazrooei, President of AAAID paid a visit to His Excellency Dr. Fouad Jaafar Al Sajooni- Minister of Agriculture and Fisheries on June 23rd 2016 during which he highlighted AAAID’s activities in Oman. His Excellency explained that AAAID’s contributions in the Sultanate is represented in the capital of the Omani European Industries Company, Bashair Red Meat Company and Osool Poultry Company. His Excellency also presented projects that are under study in Oman such as Dhofar Milk Collection and Processing Project, the Grouper Fish Breeder Project, The Veterinary Vaccines and Medicine Project and the Hydroponic Vegetable Production Project.

His Excellency Al Mazrooei highlighted a number of AAAID’s success stories in Oman including the establishment of Al Safa Food Company during 2001, which is considered a success model in the Arab countries.
From his end, His Excellency Minister of Agriculture and Fisheries commended AAAID’s efforts towards reinforcing food security particularly in the Sultanate and the Arab World in general. He also explained that the Sultanate is distinguished by an appropriate investment climate clarifying the existence of an advanced infrastructure, concessions and investment supporting laws as well as extensive expertise in all fields. His Excellency further stated that the Ministry of Agriculture was in the process of crystalizing a number of large fish breeding projects at an investment cost exceeding 850 million USD and food processing projects for Halal foods at an investment cost estimated at 700 million USD.