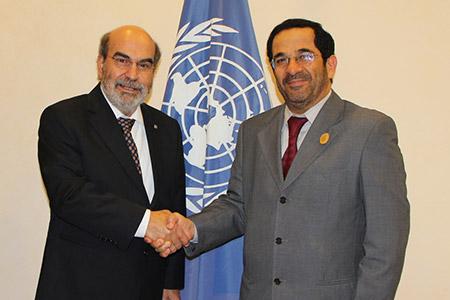 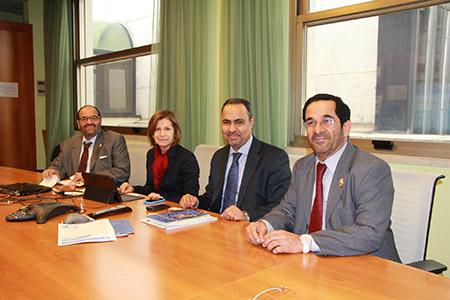 President Meets with the Director of FAO


His Excellency Dr. Goze Graziano Dasilva , Director General of FAO Organization has received in his office in the headquater of FAO Organization in Rome, HE Mohamed Bin Obaid Al Mazrowei – Chairman of AAAID on February 20 , 2014 , during his visit to Rome to participate in thirty – seventh meeting of the Council of Governors of IFAD.
HE director of FAO welcomed HE the President Al Mazrowei and extend his appreciation for the visit.

HE Al Mazrowei gave him an explanation on AAAID’s activities in the areas of agricultural investments and developmental programs , he also discussed the ways to support cooperation between FAO and AAAID in the areas of agricultural information for the Arab countries ,in addition to the preparation of f. Studies with Investment Centre of FAO, as well as cooperation to support small and medium scale farmers and in the field of technology transfer.
His Excellency the President of AAAID also attended meetings with investment centre and the international centre for information and early warning of FAO .
The two sides discussed the ways to enhance cooperation between AAAID and the investment centre of FAO.
His Excellency the President of AAAID has declared that AAAID is working on establishment of experimental farms in some Arab countries for the deployment of new agricultural techniques.