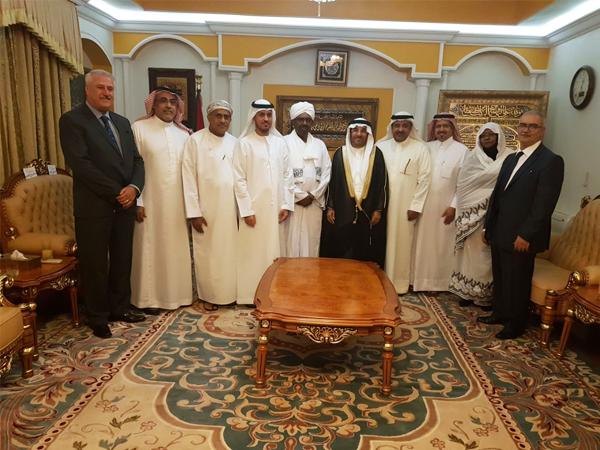 
H.E President Omar Hassan Ahmad Al Bashir welcomed H.E Mohammed Bin Obaid Al Mazrooei, President of the Arab Authority for Agricultural Investment and Development, accompanied by the members of the Board of Directors of AAAID, at the Presidential Guesthouse in Khartoum on 27 December 2017.
H.E Mohammed Al Mazrooei discussed with H.E President Omar Al Bashir the new projects of the Arab Authority and its activities, as well as the obstacles and difficulties facing AAAID’s projects in the country of the headquarters, Sudan. His Excellency pointed out that Sudan is the largest country with agricultural resources where AAAID has invested about USD 700 million and established 12 agricultural projects in different sectors. H.E President Al Mazrooei further explained that the Arab Authority has three new projects in the sector of sugar and red meat worth USD 120 million and veterinary medicines worth USD 46 million. In addition to approximately ten thousand feddans provided to small farmers that twenty thousand farmers were able to benefit from.
His Excellency further stressed that Sudan is rich in agricultural resources that have the potential and requirements that make the country the food basket of the Arab world. His Excellency also pointed out that the Arab Authority contributed to the initiative of the President of the Republic to achieve Arab food security, and provided a number of agricultural projects in support of the initiative of the President of the Republic H.E Omar Al Bashir, including the Agadi project in the Blue Nile province.
On his part, H.E President Omar Al Bashir confirmed Sudan’s support of the Arab Authority for Agricultural Investment and Development. As well as to provide all facilities and aid in overcoming obstacles to implement AAAID’s projects.