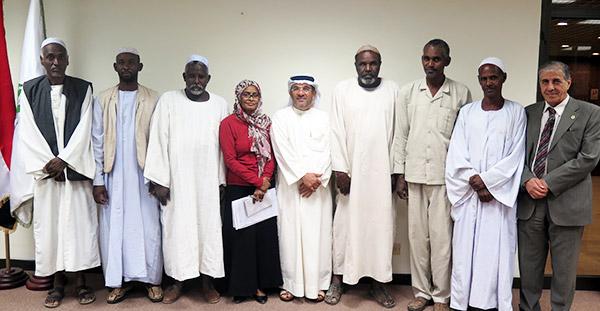 
The Trust Fund was established by AAAID to enhance its role towards sustainable development particularly in rural agricultural communities. This is achieved through resource allocation towards increased productivity and poverty alleviation in rural communities. The Fund aims to support basic services such as health and water in production areas and poverty-stricken areas as well as provision of support services to low-income small-scale farmers. This support comes in the form of appropriate technologies, provision of animal and plant production inputs and provision of finance to small-scale producers particularly women, training and capacity building for the small and medium sized business sector to increase and sustain production rates.

In that light, a group of representatives of the Ray Al Gaboja’s Al Jamoosi Office farmer’s associations paid a visit to His Excellency the President of AAAID Mr. Mohamed Bin Obaid Al Mazrooei in his office in the authority’s Headquarters in Khartoum on the 18th of April 2016. The purpose of the visit was to present the outcomes of the current season and express gratitude on the support and assistance extended by AAAID, which has had significant impacts on the increase of production. The delegation relayed their wishes for the President to visit the project site considering that AAAID is a principal partner in the project’s success emphasizing that the visit would be a strong motivational factor for the farmers.

It is worthy to mention that the success of the small-scale farmers during the Al Safi irrigation channel during the harvest season 2014-2015 and the positive outcomes achieved from the project assisted in its transfer to other departments in Al Gezira Scheme. Based on that, Al Gaboja farmers associations of Al Jamoosi Office as another department requested finance in March 2014 and a field visit was conducted on approval of His Excellency President of AAAID. The purpose of the visit was to prepare a study, which was completed and approved for program implementation targeting 79 farmers of which 37 are peanut farmers in an area of 368 Hectares, 42 farmers are wheat farmers in an area of 280 Hectares. This succeeded in generating positive responses amongst the farmers regarding the flow of finance in the specified time from AAAID as compared to other institutions.

The Fund commenced its activity in the second half of 2006 with the execution of public utility support projects and the provision of revolving loans to low-income groups in remote and poverty stricken areas such as Hamrat Al Sheikh, Um Sunnut (Dar Al Kababeesh) in Northern Kordofan, Roro Village in the Blue Nile State, Eid Al Wakeed Village in Sennar States, Al Danagla village in AL Gezira State and others. The Fund also adopts a strategy based on working through local institutions and in active collaboration with all project beneficiaries through the various project phases from its conception to implementation, monitoring and evaluation. The Fund’s projects also places focus on facilitated loans and the contributions of beneficiaries to ensure their sustainability.