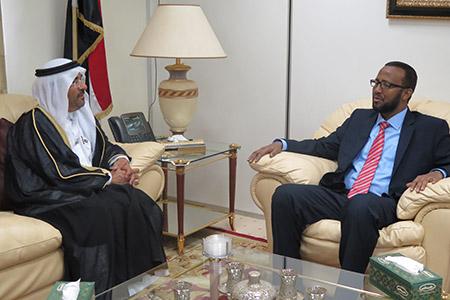 
His Excellency Mohamed Bin Obaid Al-Mazrooei, President of AAAID received His Excellency Said Hussein Eid Minister, the Somali Minister of Animal Resources accompanied by the Somali Ambassador in Sudan and a number of experts in the field of animal wealth. The visit was held on December 3rd 2015 in His Excellency’s office in AAAID’s Headquarters in Khartoum.
His Excellency welcomed the Minister and his accompanying delegation and expressed his gratitude for the visit. He also provided an elaborate explanation using a corporate video of AAAID’s investments in the field of animal production in Sudan. These investments include Arab Poultry Production and Processing Company and the fisheries project in Tayba Al Hasnat. Further he stated AAAID’s plans to restart operating its milk unit and the feasibility study for the Red Meat Project.
The Minister thanked H.E Al Mazrooei for the opportunity to meet with him in the framework of exploring areas of cooperation and coordination between AAAID and the Somali Ministry of Animal Resources. He also informed him of the status of animal resources in Somalia and stated that there was an interest in availing green fodder and developing natural pastures and that Somalia’s animal resource exports reached 5 million heads in the last year.