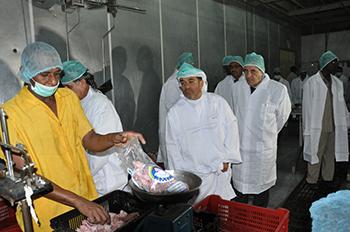 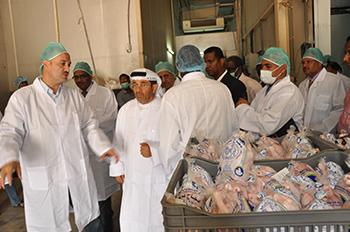 
The Animal production sector compose of meat and poultry is one of the most vital sectors in which AAAID operates. The Arab Poultry Production and Processing Company is one of the pioneer companies in this sector, and was established and commenced its production activity in 1982 in the Republic of Sudan.

His Excellency Mohamed Bin Obaid Al Mazrooei, President of AAAID visited the Arab Poultry Production and Processing Company in the area of Tayba Al Hasnab, south of Khartoum as part of a series of field visits conducted to the authority’s affiliated companies in the host country. A number of senior managers from AAAID accompanied H.E on his visit with the purpose to oversee the company’s position and monitor its activities to improve and develop its production activity and performance.

During the visit, His Excellency oversaw the progress of work in the hatchery division, which consists of two barns, mother hen and broiler farms and a slaughterhouse with a freezing room and cooling stores for preservation. He also reviewed a palm tree farm that produces a variety of dates such as Albrahi, Knezi and vegetative dates. Also during his visit, H.E engaged in detailed discussions and received explanations from the company’s General Manager who presented the operational developments in the field and the company’s annual performance highlighting that production rate is considered stable. He added that the company is successful and pioneering in its field and has managed to produce approximately 3.38 thousand tonnes of broiler chicks and 13.8 million table eggs.

The Governments of the Republic of Sudan, the Kingdom of Saudi Arabia, Kuwait and the Republic of Iraq and AAAID are contributors to the capital of the Arab Production and Processing Company.