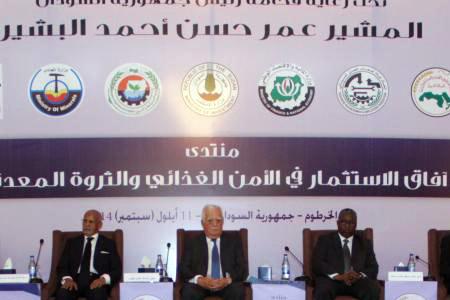 The Forum of Investment Prospects on Food Security and Mineral Resources


Under patronage of his Excellency President Omer Hassan Al Bashir-President of the Republic of Sudan , the capital Khartoum hosted The Forum of Investment Prospects on Food Security and Mineral Resources in the period from 10 to 11 September 2014 in Al Salam Rotana Hotel .
The forum witnessed a wide participation from the officials , ministers ,businessmen and the Arab and foreign investors.
The forum organized by General Union of Chambers of Commerce, Industry and Agriculture for Arab Countries, in collaboration with the Federation of Sudanese Businessmen and Employers, and the Ministry of Finance and National Economy, and the Ministry of Investment, and the Ministry of Agriculture and Irrigation, the Ministry of Minerals, and the Union of Sudanese banks.
The forum comes at its third session after success of the previous two sessions which resulted several agreements between the Sudanese side and the Arab businessmen and investors.
The forum focused on activation the initiative that launched by the Sudanese President Omer Al Bashir on Food Security during the developmental Summit that held in Riyadh city in early last year 2014 in the Kingdom of Saudi Arabia.
The third session of the forum which was chaired by professor Bakri Yousif – Secretary General of the Federation of Sudanese Businessmen and Employers , discussed the projects and initiatives that can promote and push Sudan initiative on food security.
Professor Malik Nasur Malik the expert and representative of AAAID reviewed the projects which AAAID is implementing , calling for the development of investment criteria and to intensify the developmental programs and applied research to the small and medium farmers in the Arab world.
Dr. Malik said that the activity of agricultural investment is the corner stone of AAAID’s activities , so AAAID had established a number of agricultural companies , he added that AAAID is monitoring the performances in these companies and providing them the administrative and technical support.