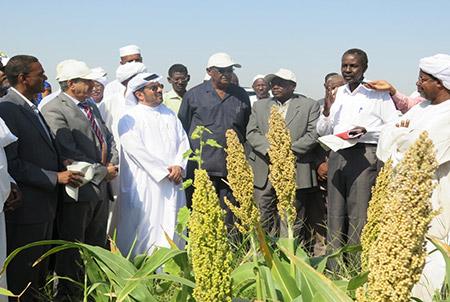 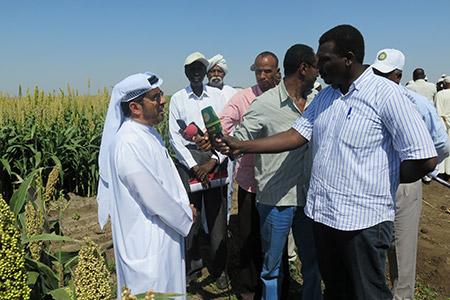 The Forum of Investment Prospects on Food Security and Mineral Resources


His Excellency Mohamed Bin Obaid Almazrowei – AAAID’s President accompanied by the heads of the departments have paid a visit to the site of Al Safi Project in the Gezira scheme on Monday 20/10/2014.
The project is one of the programs that implemented by AAAID through its Trust Fund department . This project implemented in collaboration with Al Safi farmers Society in the Gezira State.
This program aims at supporting the small farmers and producers through the revolving loans as the similar programs in the states of Sudan ( White Nile State, Blue Nile State, Kassala State, Gedaref, River Nile State, Northern State, the State of North Kordofan, South Kordofan).
The visit aimed at stand on the experiment and to evaluate the cultivation of some crops such as maize, groundnuts and wheat on an area of 264 acres.
The delegation was received by Eng. Osman Simsa’a -Director of the Gezira Scheme , as well as the Representative Sudan Farmers Union and the Rep of his Excellency the Governor of Gezira State in addition to the farmers of the project.
His Excellency Al Mazrowei has extended his gratitude to all officials in the State specially the high management of Gezira scheme and the farmers in Al Safi area for their efforts that they made to the success of the project and he called on every one to make more cooperation to utilize the huge agricultural resources that available in Sudan, stressing AAAID’s keen to provide all required support to the farmers and producers sector by creating a successful partnerships.