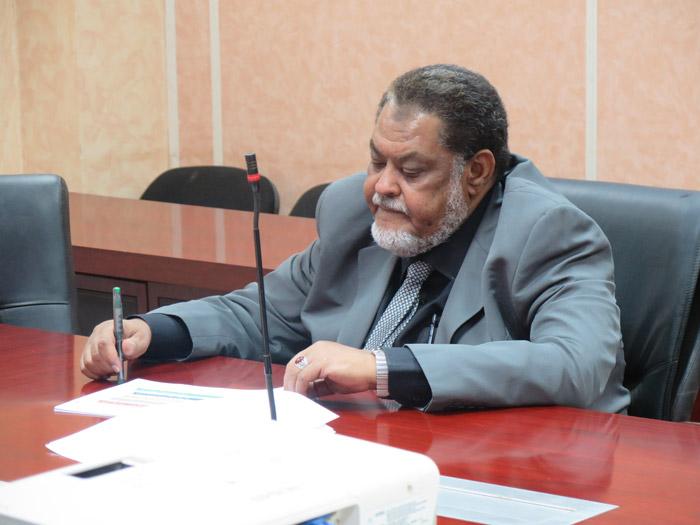 
HE Mr. Mohammed bin Obaid Al Mazrooei, President of the Arab Authority for Agricultural Investment and Development, and his accompanying delegation, met with Dr. Mohamed Osman Soliman Al-Rikabi, Minister of Finance and Economic Planning of the Republic of Sudan, at his office in the Ministry premises on Tuesday, 13/6/2017. The meeting was organized so the Arab Authority can continue its efforts aimed at enhancing Arab food security.

H.E the President of AAAID congratulated the Minister on his assumption of the duties of the Ministry as well as the Holy month of Ramadan. He also expressed his thanks and appreciation to the Minister for providing the opportunity for this meeting, which comes in order to acquaint the Minister with AAAID and its vision, mission, goals and different investments. This is in addition to the diverse sectors in which the Arab Authority operates, which are the industrial sector, plant and crop production and livestock production, as well as the services sector.

H.E Mr Mohammed also briefed the Minister on the efforts exerted by AAAID to achieve food security by organizing the 3rd Arab Conference for Agricultural Investment in Sudan, under the patronage of His Excellency the President of the Republic, which was a great success. He also updated him on the investments of the Arab Authority in the fields of sugar and oils and the difficulties facing this sector, as well the interest received by AAAID from the Government of the Sudan for its various activities in the Republic of the Sudan.

For his part, the Minister welcomed the President of the Arab Authority and the accompanying delegation and wished AAAID success in its serious efforts to increase investments in Sudan, appreciating the role of the Arab Authority in the Republic of Sudan and its contribution to the Sudanese economy. He pointed out that the Arab Authority can play a greater role for its position and experience in the field of food security. He further backed his point by mentioning the abundance of the expertise and potential existing in Sudan, pointing out the importance of establishing a fund to serve development in Sudan in cooperation with the Arab funding facilities to support small farmers in the Arab world. He also expressed the importance of raising production and productivity for the Arab citizen, stressing the support that the Arab Authority will find from the Ministry of Finance to serve its objectives. He also promised to provide all assistance to AAAID and its companies in the headquarters country to carry out its activities aimed at enhancing Arab food security and accomplishing the initiative of His Excellency the President of the Republic for utilizing agricultural resources in Sudan so that the Arab Authority can continue its efforts to promote Arab food security.