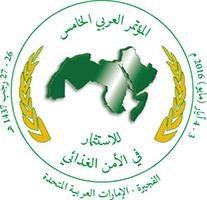 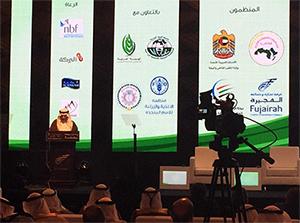 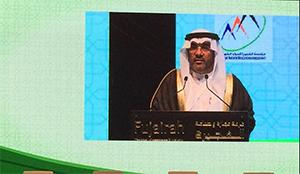 
AAAID has sought since its establishment in 1976 to achieve its set goals through the establishment of a number of pioneer agricultural projects in the Arab region. It has also exerted efforts towards allocating Arab resources and capabilities with the aim of expanding the agricultural investment base. In this context, His Excellency Mr. Mohamed Bin Obaid Al Mazrooei, President of AAAID accompanied by a delegation participated in the Fifth Arab Conference for Investment in Food Security, which is being held under the generous auspices of His Highness Hamad Bin Mohamed Al Sharqi, Member of the Supreme Council and Ruler of the Emirate of Fujairah. The Conference is held on the 3rd and 4th of May 2016 organized collaboratively by the General Union of the Arab Chambers of Commerce,Arab Authority for Agricultural Investment & Development, Industry and Agriculture, the Ministry of Environment and Climate Change of the United Arab Emirates, The Fujairah Chamber for Commerce and Industry and the Union of Chambers of Commerce and Industry of the UAE.

His Excellency delivered and opening speech during the Conference in which he explained that the agricultural sector is one of the primary pillars of economic development due to its direct and indirect impacts on various economic sectors. H.E further elaborated that agricultural production inputs and outputs are connected to a chain of production, processing, marketing and service activities. He stated that the value of the Arab food gap in terms of basic products in 2014 was estimated at 34 billion USD. Seeds represented 59% of that gap while meat was 19%, vegetable oils 12%, sugar 6% and milk and dairy products was 4%.Mr.Al Mazrooei also stated that AAAID since its establishment in 1976 has paid special to the establishment of diversified agricultural projects as well as transfer and localization of a number of modern agricultural technologies in Arab Member states. Examples of these technologies included Zero-Tillage irrigation, Smart Farming, Precision Farming and Seed Bursting. His Excellency stated that localizing these technologies in Arab countries is pivotal to the improvement and efficiency of the Arab agricultural sector and achieving sustainable agricultural development. He added that AAAID has achieved many achievements in the agricultural sector throughout its journey by focusing on the increase in the production of basic goods required to close the food gap. Mr.Al Mazrooei also stated that AAAID’s affiliated companies reached 34 as at the end of 2015 which were divided across 12 Arab country and which are currently working on the implementation of several new projects. The aim of these projects is to increase the production of certain goods such as red meat, poultry, fish, seeds and fodder. In addition, they aim to localize the production of potatoes seeds, multiplication of soya bean and rice seeds, and the production of fodder silage.AAAID’s participation was strongly evident in two discussions panel titled “Arab Food and Water security Strategies and Policies for a more secure future” and the ‘’ Arab Food Security: Challenges and Investment Opportunities”

The Conference was organized in collaboration and coordination with AAAID, the Arab Organization for Agricultural Development, the Food and Agriculture Organization (FAO) and the Arab Union for Food Industries.
The conference aims to create new horizons for projects for use of technologies and modern discoveries and their economic applications. The aim of this is to upgrade agricultural sectors and explore the UAE’s experience in the field of food security and promising agricultural investments in the context of the country’s future vision. In addition the conference aims to explore promising investment opportunities and promote agricultural and food projects.
The conference discussed a number of topics including the state of food security and agricultural in the Arab world, the experience of UAE in food security and exemplary project models and the available investment opportunities in Arab food security. Other topics included areas od modernizing the agriculture and its related sectors, best practice experiments for reinforcing production and productivity and food sustainability and safety as well as the role of the Arab world in Food and Water safety.
The United Arab Emirates is considered one of the largest contributors in AAAID that seeks to achieve a pioneer status in sustainable economic development in the Arab world through its investment, development and research projects as well as its social responsibility with view of setting a leading example in the Arab world.