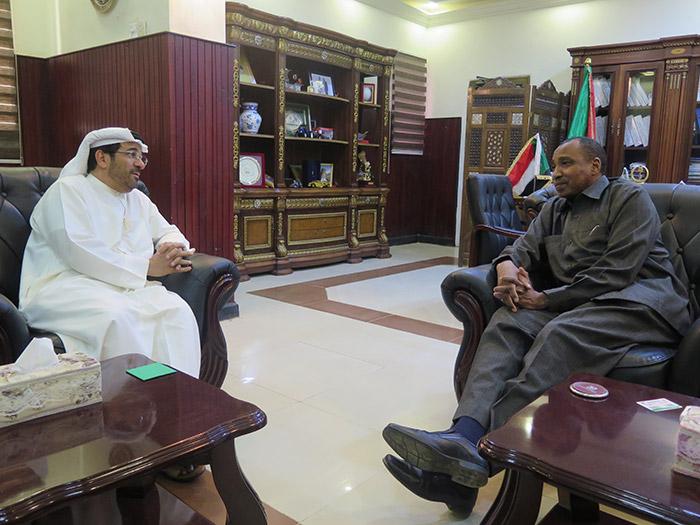 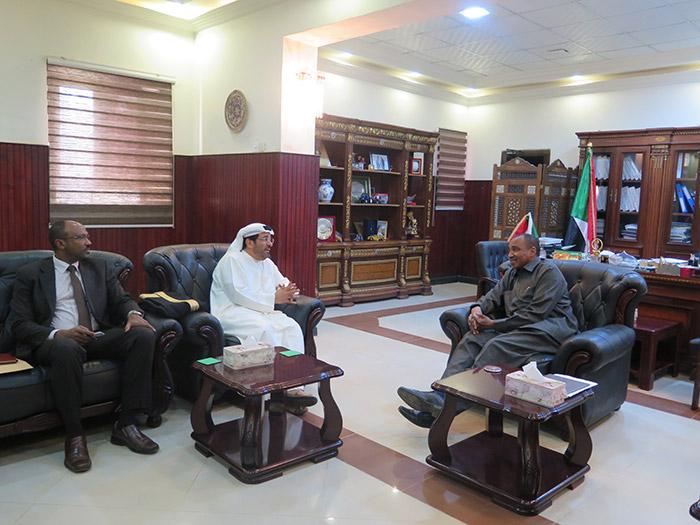 
The Arab Authority started its activities in the field of agricultural investment from the Republic of Sudan because it is a country rich in natural resources of vast, fertile agricultural lands, livestock and various, natural water resources. There are 12 companies, in Sudan, that are affiliated with AAAID, in addition to many groundbreaking development projects.

AAAID’s President orchestrated follow-up visits to a number of sites of the Authorities’ projects and activities in the headquarters host country of Sudan. One of these visits was to H.E Dr. Ibrahim Adam Ahmed El Dekheiry, Minister of Agriculture and Forestry at his office, on Monday 10 April 2017.

H.E the President of AAAID expressed his gratitude towards the Minister and all the officials for welcoming them and their continuous support that the Arab Authority receives in regards to its various activities and projects at the headquarters in Sudan. He further indicated that the goal behind the visits is to inform the Minister about some of the problems facing the companies under the Arab Authority in Sudan urging the Minister’s support in overcoming said issues.

Alternatively, the Minister welcomed the President of AAAID and the delegation accompanying him and thanked him for the continuous contact with officials of the Ministry of Agriculture and Forestry as well as the Government of Sudan. The Minister also stressed the importance of the role of the Arab Authority in reaching food security in Arab nations by utilizing the natural resources available in Sudan as per H.E the President of Sudan’s initiative. H.E Dr. El Dekheiry discussed the Wadi Kaya Sugar Factory Project in the Add Al Forsan district located in South Darfur in Western Sudan. He pointed out that the feasibility study of the project, which indicates that the project’s capacity to produce about 450 tons of sugar per day has been completed. He further advised the Arab Authority to study the possibility of participating in this project in relation to the accumulated experience of the AAAID in the field of the sugar industry and its byproducts.

From his end, AAAID’s President praised the idea of implementing such a project indicating that they usually lead to the economic and social development and growth of the regions. He also promised that the Arab Authority is to review the studies and research to determine the possibility of a future collaboration.