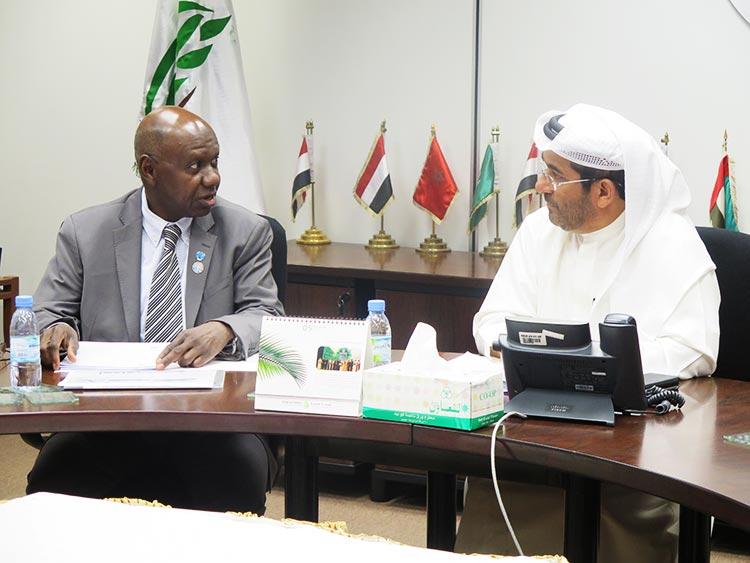 The Unity of Development Objectives and Joint Collaboration, Connects FAO with its counterpart AAAID


On, 6 May 2018, His Excellency Mohammed bin Obaid Al Mazrooei, President and Chairman of the Board of the Arab Authority for Agricultural Investment and Development (AAAID), welcomed, at his office at the AAAID headquarters in Khartoum, His Excellency Mr. Babagana Ahmadu, FAO Representative in Sudan.

His Excellency Mr. Babagana congratulated His Excellency Al Mazrooei on assuming a new Presidential Cycle (2018-2023), and wished him success in his duties. His Excellency then provided an explanation on the objectives and outcomes of the 30th FAO Regional Conference for Africa held in Khartoum on 19 to 23 February 2018. In addition, His Excellency offered an invitation to AAAID to attend The 34th Session of FAO Regional Conference for the Near East, to be held in Rome this month. H.E Mr. Babagana also presented a brief on the program of agricultural statistics in Sudan adopted by FAO in cooperation with regional and international organizations, and in coordination with the Central Statistical Office of the Republic of Sudan, and called on the Arab Authority to contribute to this project which serves food security.

To conclude the meeting, His Excellency Mr. Babagana affirmed his keenness to support the cooperation and coordination between AAAID and FAO in regards to issues of achievement of food security. He also promised to promote the Revolving Loan Fund among institutions and organizations in the same field as FAO, stressing the importance of the role of the Arab Authority in achieving food security by utilizing the agricultural resources of the Arab world.